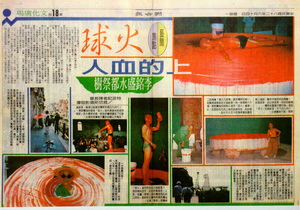 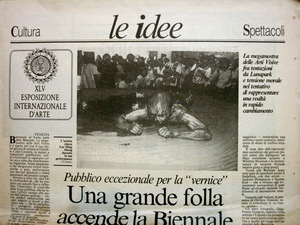 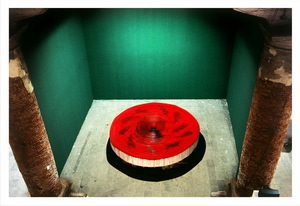 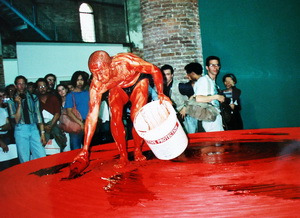 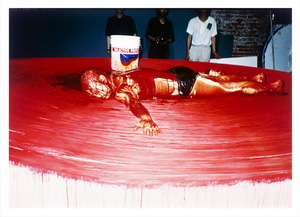 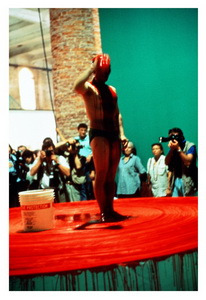 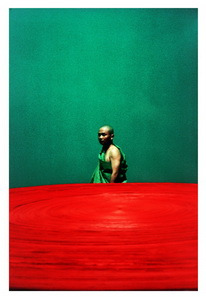 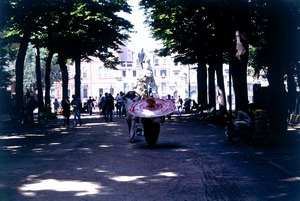 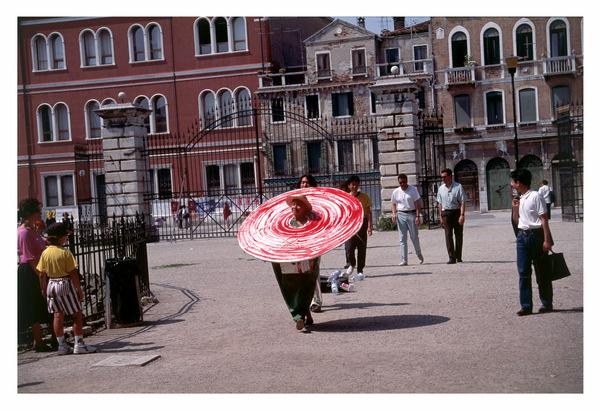 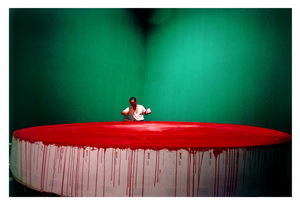 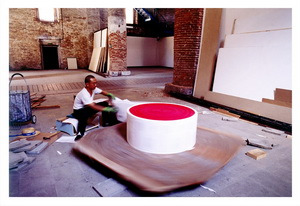 Installation and Performance / 45th Exposition International D’ARTE 1993 La Biennale Di Venezia '93 APERTO, Italy
N.B. Artist Lee Ming-sheng He is the avant-garde artists, also he is Taiwan's first awakened to open International modern art the door artist. First artist of the Taiwan are invited to participate in the great authority and importance of international art exhibitions.
The Making and Performance of “Fireball or Circle”
Owing to the relatively time-consuming preparation of this piece of artwork, I arrived fifty days early upon the exhibition site of Italy’s International de-Arte Biennale Di Venezia.
First I shaved my head. Then I used waste computer printouts (computer printouts of other peoples’ used receipts and accounts), and started from scratch to join each sheet of waste printout paper together and then to wind that up to form a tree trunk four feet in diameter (a trunk as broad as an ancient tree).
I used nearly two and a half tons of waste printouts. I was up at six every morning and was at the exhibition site by seven, I sat upon a chair at the exhibition site joining the sheets of paper together until eight in the evening when my exhausted body took heavy steps from the exhibition site back to here I was staying. Day after day, I worked for approximately 40 days before I had finally managed to create a great tree trunk, four feet in diameter that seemed to have been chopped down by man. (During the process of winding the paper up, I looked like a reverent monk walking holy circuits.)
I painted the tree trunk in several layers of red acrylic paint, to symbolize the bleeding of the tree that had been sawed down.
The Performance of “Fireball or Circle”
The exhibition preview lasted from June 9th - 11th when the exhibition was opened to the heads of galleries and museums, art critics, curators, artists and the media from all over the world.
At 10am on the morning of the opening of the Exhibition preview I put on the green monk’s robe that I had prepared beforehand (Throughout the world there are to be found monk’s robes in white, black, grey, yellow, blue, the only colour missing is green.) I put circle made of the polystyrene thrown away by artists participating in the biennale around my neck, like a cross section that shows a tree’s age, I carried a plastic bucket in my hand which I hit making a 〈dong-dong dong-dong …. 〉 sound. I also invited a Japanese artist to drag things which would make noise (old metal pipes, plastic bottles which were also thrown away by artists) on a piece of string, and to follow me as I went. Like a small funerary procession we roamed about the city of Venice had for my father when he passed away.
I performed a funereal ceremony for the tree in the same manner as the funeral we
I read from the eulogy I had written and the various exhibition sites of the Biennale di Venezia. Finally arriving at the “ APERTO” site, and coming to rest before my artwork (The paper tree trunk).
I walked two anti-clockwise circuits around the ‘paper tree trunk’
I took off my green monk’s robe and climbed onto the ‘paper tree trunk’
I stood upon the centre of the ‘paper tree trunk’
I took a mixture of 500cc of my own blood, five gallons of cow’s blood and high volume spirits and poured it a scoop at a time over my own head.
I shouted “Kneel↗”
I kneeled down
“Arise↗”and I stood up
“Kneel again↗”I knelt again
My body writhed in the waves of blood, twisting and turning, after two minutes
I stood up. Then I poured the remaining mixture of blood in an anticlockwise direction upon the ‘paper tree trunk’
I put my green monk’s robe on once more and stepped off of the ‘paper tree trunk’
I made a full bow to the audience (art critics, exhibition curators, artists and media persons from around the world) and invited them to share a glass of spirits with me
The audience applauded endlessly
At this point I slowly picked up the plastic bucket again and struck it slowly
dong! ---
dong! ---
dong! ---
I walked out of the performance site (the exhibition site of “ APERTO ”) and the performance was concluded
At the end of the performance, my piece of art also reached its conclusion
Following the days after the conclusion of my performance, several media organizations dedicated much space to reports of my performance “Fireball or Circle”, some presented front page reports and interviews; the piece of artwork was favourably received by international art critics. 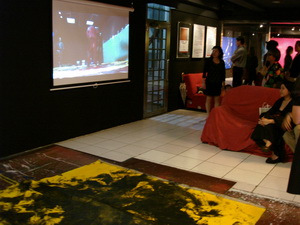 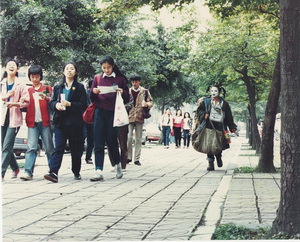 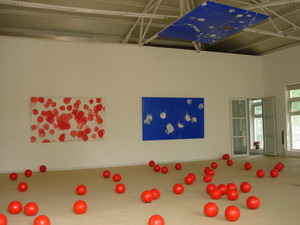 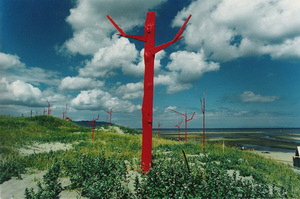 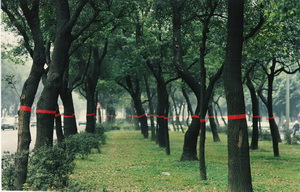 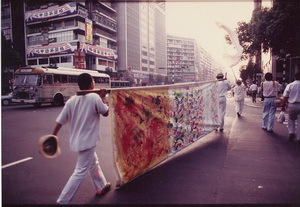 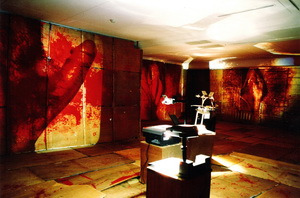 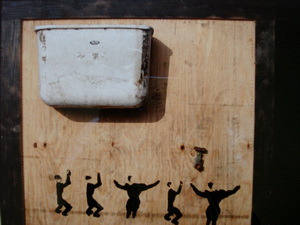 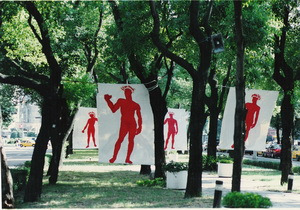 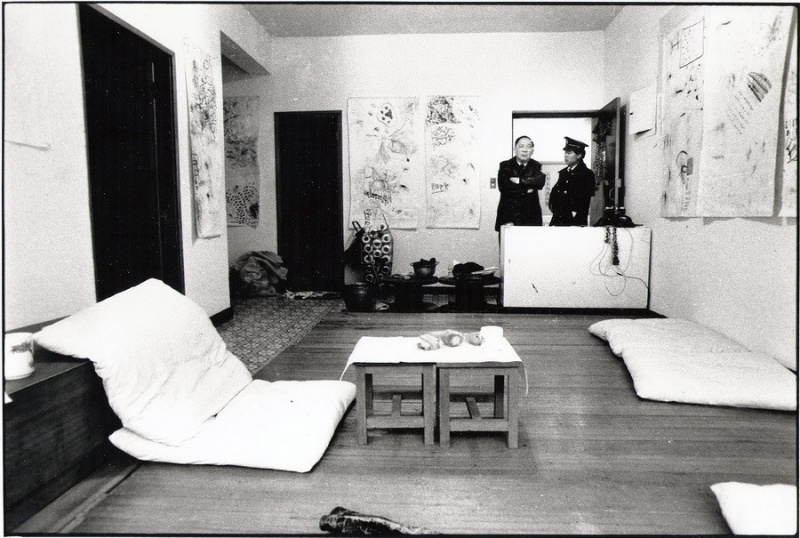 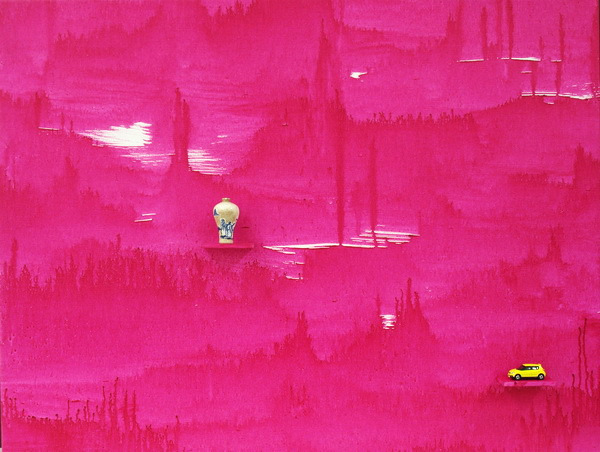 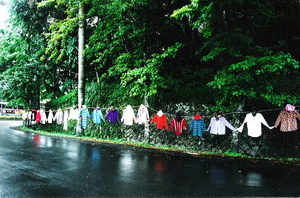 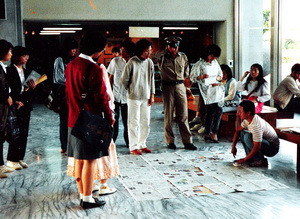 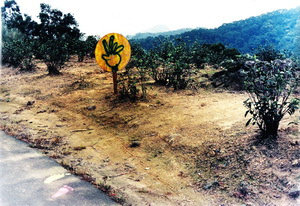